History of Office Furniture and Machines

Oxford Dictionaries defines an office as ‘a room, set of rooms, or building used as a place for commercial, professional or bureaucratic work’[1].

Offices of a kind have therefore been in use for several thousand years, and probably date back to the fourth millennium B.C. (see below). However, it seems unlikely that dedicated office furniture was made before classical antiquity. 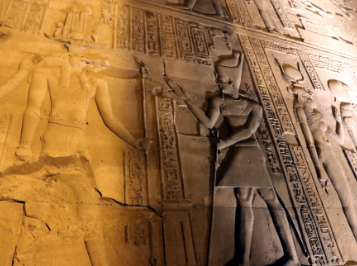 Egyptian hieroglyphs recording the taxes on commercial transactions have been carbon-dated to before 3200 BC[2]. It is claimed by some historical accounts that scribes in ancient Egypt mostly had to work without the benefit of office furniture of any character, instead suffering the discomfort of sitting on the floor and writing on wooden planks[3].

In later antiquity, large organisations such as palaces and temples kept written records of their administrative functions on scrolls inscribed by scribes. For these simple functions, it was necessary to have suitable furniture for the writing and storage of the scrolls.

There is evidence that furniture was widely bought and sold in classical Greece, including at auctions. Archaeological evidence shows modest, functional moveable wooden furniture in domestic dwellings. Chests, stools and tables are among the furniture recorded in the inventories of ancient Greek sanctuaries.[4]

From the middle ages, dedicated offices called chanceries were used for the production of official government documents that were distributed around the country.

For instance, in England, the English Chancery, presided over by a Chancellor and staffed by Royal clerks, was introduced before the Norman Conquest. Record-keeping of the transactions of the Chancery in the form of permanent scrolls called Charter Rolls began in 1199. 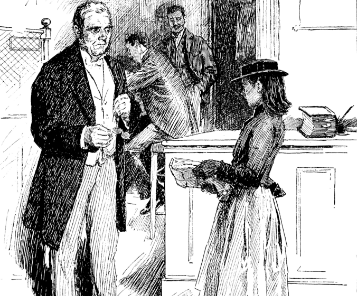 In medieval monasteries, rooms called cloisters were often used for the production and study of manuscripts produced on parchment, thus combining the function of office and study. In some cases, however, a dedicated room called a scriptorium was set aside for the writing, copying and illumination of manuscripts.

Outside central government, other forms of administrative work, for instance that of merchants and traders, were commonly carried out from home. Private workshops staffed by professional scribes produced writings to order for wealthy private customers from the 13th century onwards.

With the advent of the printing press in the late 15th century came the introduction of the commercial printing and publishing office, which while initially tending to be more focused on the production of important and classic texts, soon became useful for newspapers, journals and almanacs. This could be regarded as the first ‘office machine’: machinery appearing alongside simple office furniture and simple mathematical tools such as the abacus for the first time.

The fifteenth century study of the writer or statesman, according to 19th century historian Albert Jacquemart[5], often featured a high chair and a variety of writing desks and lecterns, with a revolving desk called a ‘wheel’ sometimes found, allowing materials such as books and papers to be rotated to within reach as desired.

Desks combining a writing surface with a chest of drawers were introduced in the late 17th century. Many of these featured hinged writing surfaces projecting to the front at a convenient height for placing a chair underneath, but that could be collapsed into the unit by being lifted upward when not in use; and this style of desk continued to be produced right through the 20th century. It is nowadays often known as a bureau, the French word for ‘office’, or a ‘secrétaire’, depending on the shape. 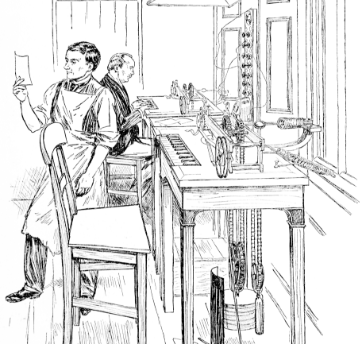 The wooden pedestal desk characterised by drawers in two pedestals astride a space for sitting, and a large writing surface on top, became popular starting in the 18th century, and remains in use to this day.

A subset of pedestal desks, the partners’ desk, is a good early example of space-saving and functionally efficient office furniture, being designed to seat two people, one at each end of the large writing area, and often integrating flexible storage space, with drawers on one side and cupboards on the other. It was soon popular with law firms and in offices.

Simpler writing tables on four legs, with a single storey of drawers beneath all parts of the writing surface, were also adopted in the 19th century.

Other designs of the early 19th century take a semi-pedestal form, with a shallow single drawer under the centre of the writing surface and a couple of drawers or a deeper single drawer at each of the edges, but raised high above the ground on legs.

Dedicated office buildings began to spring up in London from the 1720s.[6]

In Victorian times, elaborate ornamental detailing and decoration, and elegantly curved legs, are quite frequently found on desks and writing tables, while simpler square forms continued to be found on some pedestal desks.

Another popular feature was tiers of small drawers mounted on top of the rear parts of writing tables.

The Davenport desk, featuring a pivoting lid that could be raised from the front to reveal hidden storage compartments, also became widely adopted in the later 19th century. Simplified and smaller derivatives of this, typically fitted with inkwells as well as plenty of below-the-lid storage space for books, became the school desks that were familiar to generations of children right through to the 1990s, when large shared tables tended to displace them.

A decorative variant form of the Davenport desk is the roll-up desk, sometimes known as a cylinder desk, whereby the lid to the hidden is curved and simply rotates to the back of the unit.

The one-sided pedestal desk, a convenient choice where space is limited, was popular starting towards the end of the 19th century, and is still produced in more modern materials to this day.

The introduction of telephone exchanges to parts of the UK in the late 1870s foreshadowed the pervasive integration of the telephone into office life.

This happened slowly, and did not reach the millions until well into the early 20th century. In 1884 there were reportedly already 13,000 telephones in current use nationwide, increasing to in excess of 32,000 lines by the early 1890s.[7] 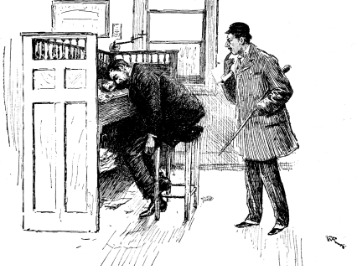 The PhD. research of Jeremy Stein[8] has found that within the London borough of Hampstead, by 1902 only 53 telephones were registered to places of employment, and 139 to places of residence. The population of the borough is recorded in the 1901 census as 81,942, so there was still less than one telephone for every four hundred residents there when Queen Victoria died. But in time the telephone would become a universal feature of the modern office.

The modern typewriter was mass-produced from the 1870s, but was only standardised in the early 20th century.

What we think of as a modern office starts to take shape in America in the early 20th century. Office furniture at this time tended to be space-saving and functional, partly thanks to the influence of mechanical engineer Frank Taylor. A typical large office would have row upon row of simple chairs and compact desks, allowing numerous clerks to work simultaneously at a high density.[9] The shared open-plan office continued to be a feature of new office buildings throughout the 20th century, but typically alongside private offices reserved for managers and those engaged in particular tasks demanding a high degree of concentration.

The use of moveable internal office partitions to give workers somewhat more visual privacy and a measure of mutual acoustic insulation did not gain significant traction until the 1960s, but then remained popular throughout the rest of the 20th century before falling out of fashion in the early 21st.

Traditional wooden desks and tables gave way to designs featuring space-saving and durable thin metal legs. Particle board, sometimes topped with a thin layer of wood veneer, began to replace solid wood for table tops and desk tops in the 1950s, with medium density fibreboard following in the 1980s. 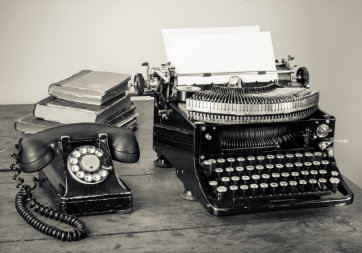 While the use of typewriters accelerated as the 20th century wore on, in the late 1950s mainframe digital computers began to be available to the offices of big companies, with personal computers and employee workstations based on the modern microprocessor reaching the market after 1975 and achieving mass-adoption in the 1980s. Eventually the typewriter was cast off.

The space-saving electronic pocket calculator had already become a universally adopted tool, cutting down significantly on the amount of time that had to be spent on manual calculations.

The modern fax machine, introduced by Xerox in 1964, allowed for the instantaneous long-distance transmission of copies of documents via a telephone line, and was an office standard until it was ultimately superseded by email attachments with the widespread adoption of the Internet in the late 1990s.